I finally found a set of Illumina S35 MK-II primes that I could rent! I’ve always been a fan of vintage glass, so I keep a list of optics that I want to get my hands on and close to the top of that list was a good set of Lomo spherical lenses. When I heard that a company was breathing life back into the classic Russian optics, I was very interested.

The lenses sport a compact, modern body with a sharp paint job, but inside they are quite classic. The easiest way to describe them is to compare them to Zeiss Master Primes (crazy right?).  They both render sharpness and color quite similarly, as well as both having almost no breathing throughout the entire range of focus. Both have a very natural dimensionality. Even on the wide end, the Illuminas 18mm prime has very minimal distortion. 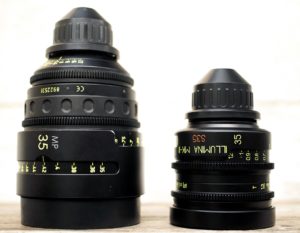 Of course, there are differences and one of them is the size.  The Illumina’s are about the size and scale of the Leica Summilux-C primes, each weighing in at around 3 pounds each.  The second difference is in the way they render flares. Master Primes are very clean and clinical feeling to me, whereas the S35’s have quite a lot of fun characteristics that stream through the lenses in a very organic way.

The film I was shooting was very stylized having two parallel stories that jump back and forth between each other to create a disorientation or dreamscape effect. The very flare-forward looking images added an awesome visual to that.  They look great wide open, although they do show slight chromatic aberration that I thought added to our look. 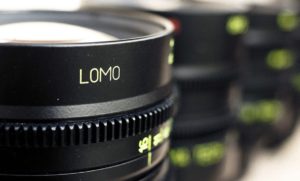 While they are so very reasonably priced, there are a few things that could be improved. One of the drawbacks you encounter right away is that most houses don’t have them in stock and if they do, they don’t have a lot of experience with adjusting them if there are any mechanical issues. Another drawback is with the aperture ring in the front of the lens. It works fine, but it gets bumped often and is always a little odd when rigging motors.  My last issue with the set is that the housings won’t work well with clip-on matte boxes–like with the older Superspeeds (although the MKIII body images look like they may have fixed this issue).

Overall, I think these lenses are great for an indie film looking to get some interesting character without giving up any resolution or a big chunk of the camera budget. I loved the images we got out of them and want to thank Eric M. at The Camera Division for helping us out with both these lenses and our camera gear. I’d also like to thank the mad scientists at Lutify.com for giving me some good starting points with the films look.  I’m hoping to get my hands on the MK-III’s soon!

Here are some links to some great in-depth tests of these lenses against more common cinema glass: