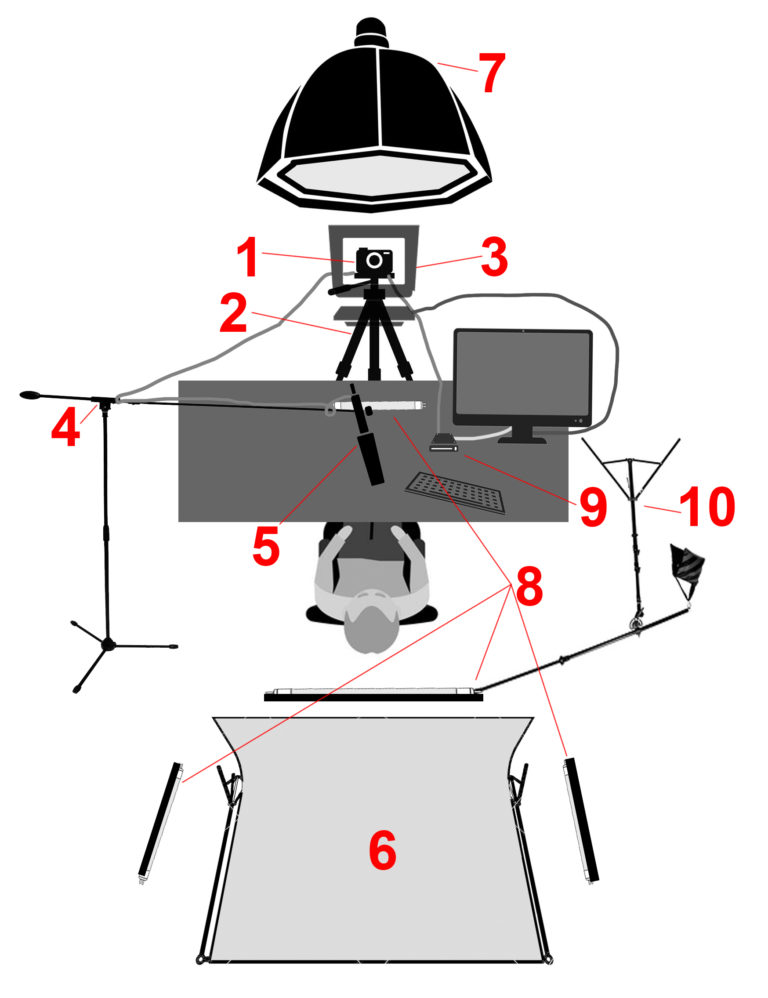 I’ve seen a lot of posts on Twitter looking for advice on how to make their live video streams better and I’ve been watching some major news broadcasts looking at the quality and wondering the same thing. I ended up making a list of everything I think would help you going into your next Zoom conference, Google Hangout or Instagram live.

This is one example of how you could go about setting up a talking head style streaming set. In this example there is a single subject, sitting, speaking directly into the camera, against a greenscreen backdrop. Basically this is what you would see with a news broadcaster. This can also be expanded out to add many more pro additions*, but for now, let’s stick to the basics. I’ll explain each part.

The best starting point for your system is a good camera. You don’t need the most high-end, most expensive one you can find but there are a few things you need to make sure whichever camera you buy has:

This is where it’s good to put any “Cinema” tech-blinders on that you might have and just look for the best tool that checks all the boxes as cheaply as you can. Sony makes a good mirrorless DSLR and the camera that keeps coming up most is the Sony Alpha 6400. It’s an APSC sized sensor so any lens with a Sony-E mount (or if you add an adapter the sky’s the limit!) will work fine. Even in this little size, the camera manages to handle all of the needed elements for streaming use, as well as just being a great camera to bring on vacation! It’s offered with a stock Sony 16-50mm zoom lens. It’s not the best lens, but should be great for this use. The major complaints about this camera are things that would not be problems in this setting ie: no in-body stabilization, no headphone jack, and bad rolling-shudder. Again, this won’t be an issue for our use here. You will also need to pick up a AC-PW20 dummy battery AC adapter to keep it up and running for hours.

This is the first thing people cut corners on and it always ends up biting them. The good thing is that what we need one for you won’t need to break the bank. Basically we just need a solid head that will hold our camera and some potential accessories down the road. For that, I think a solid Manfrotto 502a with some sturdy legs will work fine. The head is said to be able to hold up to a 15lb payload, but I’d say keep it under 13lbs.

This is probably a luxury but a lot of “professional” hosts use them and if you want to look professional, you should too. You can read your script, bullet points and/or comments or other feeds by having a video teleprompter supplied with a live feed of the camera and a live feed of comments from one of the streaming platforms, and lastly, the notes they made for that broadcast. The simplest version of this I’ve found is Glide Gear TMP100. It appears that this version can either take an iPad (that you would have to mirror your desktop too) or you could buy a thin 10″ LCD screen to slide in its place. Again, this is not necessary, but might be helpful.

I’m not a big fan of mics in the shot or pined onto people for that matter. So, I am adding this to the list to help arm your mic just out of frame. On some shows, I’ve noticed hosts using a table-mounted cardioid studio microphone on an articulating arm that they lean up against the whole show. It just looks odd and like a radio show to me. It also makes it so that they are always limmited with there movment and ther free hands. Maybe an audio pro might tell me I’m wrong but I prefer no mic in the frame.

I still stand by my opinion that a good cardioid mic is always the way to go. They always seem to have a more full sound and body. You can’t really go wrong with a Sennheiser MKE 600. Make sure you plug the mic directly into the camera (unless using a mixer, then go from the mic into the mixer, and mixer into the camera). This has to do with sync issues. Audio and video will encode at different rates when coming from different locations making one have a delay more than the other at times. If they are married together before you capture them then they should stay in sync.

The biggest reason for me adding this is to give the people that need a green screen for their show a simple option. I’ve seen a lot of simple pipe-and-drape kits available for very cheap but those need a lot of steaming and stretching in order to work well with a clean a key. With the PXB Portable X-Frame you get an 8×8′ frame stretched in all four directions all on one stand. It keeps everything in a small package and maneuverable in a room. Additionally, the company offers different color rags available to stretch out over the frame as well. It appears they have Black, White, or Gray options.

I am always of the mind that less is more when it comes to lighting. So with that in mind, I would use a good tunable LED light with a deep softbox and lighting control grid cloth to add to it. My preference is to go with a round box so that the catchlight in the host’s eyes is more natural and pleasing. A great light for this would be the Aputure C120d II. It’s an LED with a lot of functionality and a lot of optional accessories including the Aputure Light Dome Mini II kit.

When you marry these two items you get a very pleasing front key light.

You will want a backlight for your host, as well as an optional eye-light for below camera, but lastly, you will need lights for your backdrop. If it’s a greenscreen it will need to be evenly lit a stop under the exposure of your host. If your backdrop is just a wall or room consider using lights to make it more interesting (maybe a color wash? or a glow from underneath?). In any case… I’ve learned to really like having the options that LED RGB tube lights give you on a set since they are small, fully dimmable and color-tunable instantly. Unfortunately, those are all quite expensive. However, the CAME-TV Boltzen Andromeda RGB tubes have all the options of the expensive film LED tubes versions only with a much smaller price tag. A fun addition to these lights is a built-in barn door to help shape the light. You can get 4 lights and a multi-remote for what it normally cost to get one of the pro film lights.

Since you are using an external camera that is sending out its signal via HDMI you have to now get that signal into the computer. Since you have to set this up you may as well give yourself the option for more camera inputs and that’s where the Blackmagic Design ATEM Mini works wonders! This little video mixer lets you input 4x HDMI signals in that you can then line-cut with on your way into the computer! Not only that, but it also has the ability to mix additional audio in and even do live transitions, dissolves, downstream chroma/luma keys. Additionally, it has an entire software package that will run simultaneously with the board to help you customize and add to things like graphics and time actions. * There is also a Pro option for this unit that will display a full video out preview of all feeds plus the preview and live viewer on a monitor. Most importantly, it adds an integrated .h264 encoder to take the strain off the computer and make all work more streamlined and give you wider options for broadcasting more places.

Basically, I just wanted to show a few options for rigging lights out of frame. It really all depends on how big of an area you are able to take up for your studio and if you have options in the room to not need stands for everything (shelves to put things on or maybe architecture/ furniture to mount to/areas to). I personly like the boom-stand for backlights as well as mini stands to pit lights low and out of the way. Just remember to have weight options for the bottom of stands so they don’t fall over. Here are a few sandbag options.

For low mounted lights (both vertical/horizontal) I think the Kupo Low Base Mini kit stand is a great little tool to have (especially for flanking a greenscreen with vertical tubes). For average height (4-6′ high) stands Matthews Medium Babys are good. It’s also nice to have at least one C-stand available to you and Matthews makes a good turtle base model. The last thing I’ll add to the list is a boom arm option for the C-stand and a sandbag option.

Again, these are all suggestions from my perspective coming from film/tv sets. There are hundreds of less expensive alternatives you can find online that might be smaller and a better fit for you and your show. Remember, the gear dosnt make the show good, you do. If your content is good, you expose your image well, and we can hear you, no one will ever think about the tech- and that’s the goal.